The Balnarring Picnic Race Club has a long and proud history dating back to 1863. It was in that year that the Hastings and Balnarring Racing Club, as it was then known, commenced racing. The site used for the first meeting remains the site used today.

In the early years, only one meeting was held per year, on Boxing Day.

The Racing Club registered with the VRC in 1918 and began holding two meeting a year.

The depression hit the club hard. Despite continuing to hold races during these years, Balnarring was prevented from holding VRC meetings in 1932.

In 1933 the club was reborn as the Balnarring Picnic Racing Club.

The first Balnarring Cup was held in 1948. It was won by a horse called Helenette.

During the 1950’s, the club built its first running rail to replace sticks with small red flags fifty yards apart.

In recent years, the Balnarring Picnic Racing Club has continued to develop its on course facilities and looks forward to a long and bright future.  The Club is proud to have been awarded the David J Bourke Award for being the leading picnic racing club on several occasions in recent years (most recently for the 2015-2016 season) and considers these awards to be acknowledgement of the Club’s commitment to improving facilities and enhancing the race day experience of all involved in our meetings. 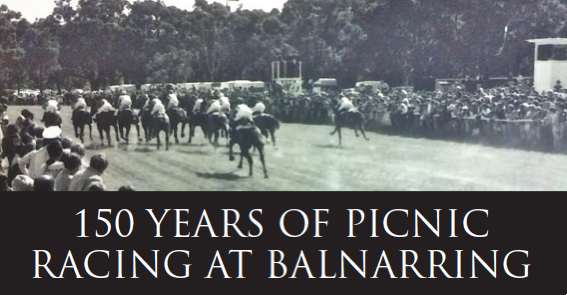 The Club acknowledges the great contribution from its Life Members and the support received from our Honorary Members: